Happy Memorial Day! As a lot of you know, I get my new music from a plethora of online sites (yes I’m a nerd & spend hours on end searching for the newest songs). The list for today features all new releases in the U.S. & also from Europe! (I wanted to mix it up a little bit). Today’s post doesn’t really have a theme – well except for the love of music, but I’m sure most of you are relaxing (cough..partying) on this day off from work & might be in need of some new tunes!

1. It’s back & better than ever… Reel to Real has a comeback with multiple remixes of the hit “I Like To Move It“… personally, my favorite is the one from the movie Madagascar! Remixes to check out: Bart B More remix & Harry Choo Choo Romero & Erick Morillo Main Mix.

2. Benny Benassi feat. Kelis – Spaceship (EDX Remix) if you want a smoother progressive version of the song; if not – try the Radio Mix

3. The immaculate SHM’s newest hit “One” is being remixed every which way, but so far this one is my favorite because it stays true to the original. It was definitely amazing watching these guys perform this single (before it came out) at Ultra Music Festival this year! Swedish House Mafia ft. Pharrell – One (Your Name)

4. With a hard-hitting electro beat & spanish vocals, this one will surely make you want to dance..& maybe even sing! Sandro Silva – Told Ya & Blaze (Apster Remix)

5. In line with a lot of recent releases featuring the “robotic/video game” feel, this one isn’t as hardcore or annoying as the others, thanks to a fabulous remix by Chocolate Puma! I think this will definitely be one of my favorite summer songs! Robert Owens – Deep Down (Chocolate Puma Main Mix)

7. Ok so in Europe last year, Edward Maya’s Stereo Love dominated dance music charts…oh yeah & it is now just FINALLY getting popular in the US (Boring!) Already topping European charts is Stromae ‘s newest hit – Alorse On Danse. It has already been remixed to feature Mister Santos & 5 million DJs have tried taking a stab at bumping this moderately tempo’d goody up to club par; however, I will recommend the Oguz Deniz Remix & …get ready for it… the Alors on Stereo mashup (Edward Maya vs Stromae)!

8. Last but not least is the newest single from Afrojack & David Guetta – Louder Than Words. The song carries David Guetta’s & Afrojack’s signature styles. The vocals mimic a John Legend vibe to me a little bit, but are nonetheless great!

*As I briefly discussed in a previous post, the dance music genre is constantly evolving & people are definitely taking notice, especially in LA. Read this article below on the shifting nature of the genre & various music festivals in LA. (Oh yes, & buy your Electric Daisy Carnival tickets!)

What.a.weekend!!!! As most of you know, I was extremely busy this past weekend DJ’ing 2 events (Saturday & Sunday). I’ll give you a mini recap of the events, as well as include some pictures for your viewing pleasure 🙂 As I’ve said many times before, this blog is not only a way for me to share my music with you (my fans), but also a place for me to talk about my many experiences DJ’ing in Los Angeles!

Getting the party started!

Saturday May 22 I DJ’d a Fresh Prince of Bel Air party in the hills hosted by my friend Jason Ramin. What a party! It definitely brought back memories of the 90’s with MC Hammer outfits all the way to Carlton look alikes from the tv show (oh & of course the Fruit by the Foot on each of the tables)! The freezing 50 degree weather definitely did not stop this crowd from dancing until 2:30 in the morning! The great part of the night for me was that I was able to play 90’s music, hip-hop, and of course my favorite… house. Going from MC Hammer Can’t Touch This to David Guetta, LMFAO, Fergie – Gettin’ Over back to Jump On It was a very easy crowd pleaser! To my surprise I received a ton of requests for more house…Deadmau5, Laidback Luke, etc., which surprised me! (I had some die hard house lovers). I think the hit of the night was the Fresh Prince of Bel Air remix I played oh and of course Tom Jones – It’s Not Unusual. Overall, the night was a fabulous success… yes I can say that because I danced the ENTIRE  time behind the DJ booth and in front of it!

Sunday May 23, I DJ’d the Summer Nights Dinner Cruise fundraiser event in Newport Beach. What a beautiful yacht! With an intimate crowd, the night started off extremely relaxing. I played a lot of my lounge music during dinner and cocktails. As the night started to spruce up, I got the crowd dancing with… of course… salsa music. (because seriously, if that doesn’t get you up, nothing will). Mr. Elvis Crespo’s Suavamente, Carlos Vives’ Fruta Fresca, & the one and only Celia Cruz’s La Vida Es Un Carnaval were definitely the hits of the evening. Even though it was windy and pretty chilly on board, (not much of a “summer” experience) the beautiful ocean & sunset views paired with the music definitely was a Sunday Funday to be had!

With the head of the event

**I wanted to thank my wonderful sister Deniz for accompanying me to all my events (not just this weekend) & helping me set up/break down all my equipment! She is truly an aSISta’lish 🙂 Thank you!

I have to say I was a little inspired by Tiesto, Armin Van Buuren, & Ferry Corsten’s podcasts this week and last week. I’m not one to intently listen/follow trance (it’s a little too much for me personally), but songs that aren’t too hardcore do spark my interest! Recently, I’ve witnessed a transformation within the dance music genre. It is becoming more commonplace for  DJ’s & producers to now create songs that fuse dance sub-genres together. From Kaskade & Morgan Page to Tiesto… these artists’ new albums have cleverly combined house, progressive, & even trance. While these sub-genres still exist in their purest form, as a DJ & music lover, it is refreshing to be able to listen to a little of everything wrapped in one song.

-If you like the song selection from today you should consider subscribing to Ferry Corsten (Corsten’s Countdown), Tiesto‘s (Club Life), Armin Van Buuren (A State of Trance) podcasts on iTunes

To the beat of your heart 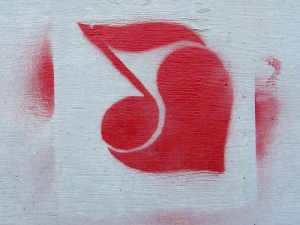 Music expresses feeling and thought, without language; it was below and before speech, and it is above and beyond all words.  ~Robert G. Ingersoll

Sometimes it’s about letting go…not thinking, not analyzing, & definitely not being so serious. (Common, we all need that once in a while) 🙂  With that said, the list for today hardly needs an introduction. The songs are all relatively new releases, they’re club bangers, & trust me – you will love them… so enjoy!

Sebastien Drums & Avicii – My Feelings For You (Digital Lab Remix)

Spencer & Hill vs. She’s All That – Jump (Oliver Twizt Remix)

Denis the Menace – Sunshine In My Heart

Sounds of the Sol…A new mix by DJ D’Lish

**For more of my mixes go to my homepage & click on DJ D’Lish mixes for my other 6!